Hisashi Takeuchi, MD & CEO of Maruti Suzuki, during the unveiling of the five-door Jimny at the motor show, said, “The SUV space in India is growing very fast. And we understand that we need more and more appealing products for young and vibrant Indian consumers. And today, we launched two new SUVs, which are important for Maruti Suzuki in India, that is Fronx and this Jimny. Those two new models, I am sure, will have a very strong appeal to Indian young consumers.”

According to Maruti, the new Jimny will be manufactured at the company’s Gurugram plant and will also be exported to overseas markets. Bookings for the Jimny SUV will also start today. Earlier in 2020, Maruti Suzuki showcased the three-door Jimny at the Indian Motor Show to attract consumers’ interest but never launched the vehicle in India. Maruti Suzuki's SUV 'Jimny' being unveiled at the Auto Expo 2023

Maruti Suzuki is expected to announce the price for the five-door Jimny SUV by mid-2023. The off-road SUV is likely to be priced around Rs 12 lakh (ex-showroom) and will go up against the likes of Mahindra Thar and Force Gurkha in the country.

Takeuchi also revealed the company’s product strategy for the next 5 years and said, “For Maruti Suzuki, the environmental issue is very important and I fully agree with Indian government's initiative to reduce carbon emissions. So, EV introduction is one of the answers to this. This EVX is a concept car for us towards 2025 but at the same time, our aim is to contribute to the better society and the better environment. So, we try to employ as many potential or possible technologies as possible. We are technology neutral, whatever is good for India, we will do it.”

“We will also pursue flex fuel vehicle using ethanol. So, we will do whatever we can do to contribute to the better Indian environment,” he added.

Maruti Suzuki’s new five-door Jimny, in terms of dimensions, is largely a long wheelbase version of the 3-door SUV sold in the global markets. The new five-door Jimny stands 3,985mm long, 1,645mm wide and 1,720mm tall. The SUV has a wheelbase of 2,590mm. The India-spec Jimny is a 5-seater car with a bench seat layout for the second row. Apart from the long wheelbase, the five-door Jimny SUV is still largely similar in terms of design to its three-door sibling. The new SUV comes equipped with a side-opening door with exposed hinges, a rear door-mounted spare tyre, bumper-mounted tail lamps and 15-inch alloy wheels.

The car also features plenty of smart storage spaces, a stack of switches on the centre console and a 4x4 gear lever. In addition to this, the five-door Jimny comes equipped with the company’s proprietary SmartPlay Pro+ infotainment system,̉ Arkamys sound system and wireless Apple CarPlay and Android Auto. The new SUV’s safety features include 6 airbags, ESP with hill hold assist, hill descent control, rear-view camera and ABS with EBD. 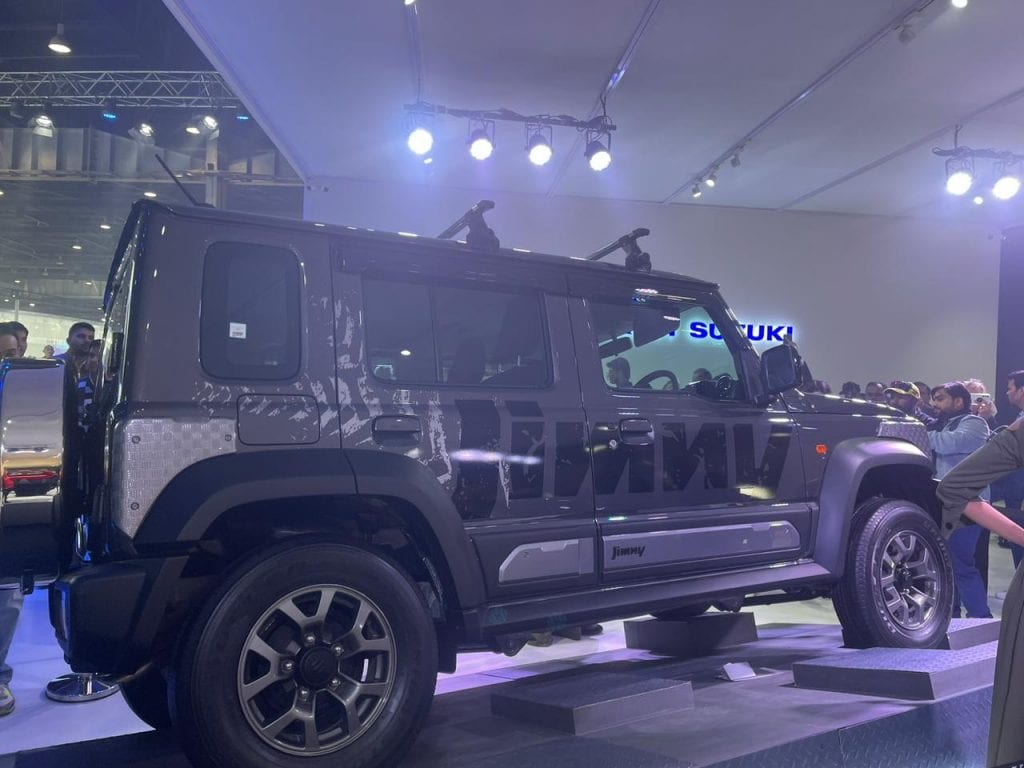 The new five-door Jimny, unlike Maruti’s other line-up in the country, features an older K15B engine that is paired either to a 5-speed manual gearbox or 4-speed torque converter automatic. Interestingly, this is the same engine that is also featured in the three-door Jimny and churns out 105hp and 134Nm of peak torque. However, the new SUV will also get Maruti’s mild-hybrid tech.